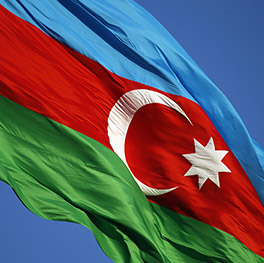 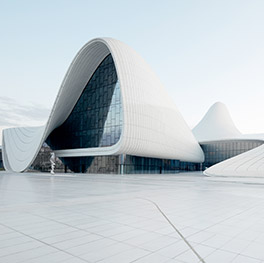 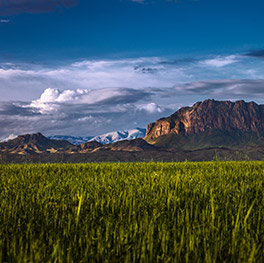 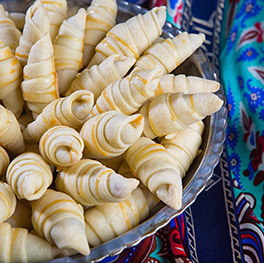 Azerbaijani cuisine
BAKU – IS A CULTURAL CENTER OF AZERBAIJAN

Baku is one of the world’s most beautiful cities located at the intersection of Europe and Asia. The name of the city is interpreted as “wind blow”, “city of winds”, “hill or city on a hill”.
City port of Baku is a cultural, industrial and political capital of Azerbaijan located on the western coast of the Caspian Sea on the shore of eponymous bay in the southern part of Apsheron peninsula famed for its oil deposits.
Baku includes 11 administrative districts and 5 settlements of urban type.

City of Baku is golden pages in the history of Azerbaijan.
The history of Baku goes back to the epoch of Paleolithic where a primitive man inhabited Apsheron peninsula. First rock carvings testifying to the high level of development of local tribes appeared in the transition period from the Stone Age to the beginning of the Bronze Age on the territory of Apsheron.
Flowering of Baku goes back to the ancient period as witnessed by various archeological findings. Besides, many medieval buildings of Icherisheher (Old city) are built on foundations of destroyed ancient buildings.
Baku emerged as a small fortress on the sea shore. It was fenced by a fortress wall with a ditch. In the beginning of the first millennium it was a well-developed port city. Under the Roman rule as referred to in an old Latin inscription near the food of Beyuk-dash.
In the early Middle Ages (5-12 centuries) a territory of Baku was a part of the Shirvan province. Under Sasanides, Shirvan was a separate administrative unite and later when Azerbaijan was captured by Arabs, the territory was called the state of Shirvanshahs which included, besides Baku, Shemakha, Derbend and other towns of Azerbaijan.
In the 10 century Baku turned from a small littoral fortress into a large trade and sea port in the Caspian Sea. Like many other states of the Arab caliphate, the state of Shirvanshahs enjoyed a relative independence. The city had repeatedly been attacked by Russes who pillaged and destroyed Baku. However, the history of Baku in the reviewed period is relatively tranquil. One of the attacks took place in 1030 when troops of Russes fought against army of Shirvanshah Minuchihr 1 Ibn Yazid. Shirvanshah was defeated, and Russes seized some territories of the state. In a year the occupants were ousted from Baku.
The 11 century marked the wars of conquest of Turks-Seljuks. In 1066 they attacked the city for the first time, and in the end of the 12 century the state of Shirvanshahs with Baku as its capital fell under the power of Seljukides. In the end of the 12 century fortification erections were built around the city which partly continued to our days. According to the historians of the reviewed period, Baku turned into one of the most unassailable fortresses in the Caspian Sea, and its significance essentially increased.
In 1220, Azerbaijan was first attacked by Mongols. In 1231 Mongols attacked Azerbaijan for the second time, following which the whole territory of Azerbaijan was conquered by Mongols. Note that Baku was a single city that offered stubborn resistance to Mongols but in the end the residents of the city had to surrender.
During the rule of Mongols, rulers from the dynasty of Shirvanshahs were vassals of Mongolian khans. A territory of the Caucasus conquered by Mongols was renamed into Sultaniya ruled by a Mongolian dynasty of Ilhanides. The city of Baku became a winter residence of Mongolian rulers.
Following the dissolution of the Mongolian state in the 14 century Shirvanshahs started fighting for independence which they gained only after the death of Amir Timur. For one hundred years Baku and the state of Shirvanshahs enjoyed absolute independence from foreign aggressors. This period marked a new stage in flourishing of Baku. Thus, a famous palace of Shirvanshahs was built, large scale work was carried out to beautify the city, caravanserais and bridges were built, etc.
A new stage of conquests of Baku began with advent to power in Iran a dynasty of Safavides. In 1501, Shah Ismail Safavi captured Baku and annexed Azerbaijan to Iran. As a result of the struggle between Iran and Ottoman Turkey Baku had repeatedly been conquered by Turks, in particular, Ottomans seized the city in 1578; however, later the Iranian troops succeeded in recapturing it again.
As one of the largest commercial ports in the Caspian sea, Baku mattered most as a strategic center, so it was not surprising that the Russian empire joined the struggle for the city. In mid-18 century the Baku khanate appeared which in 1796 had first been seized by Russian troops. Baku finally fell under the protectorate of the Russian Empire in 1805.
In the reviewed period Baku began developing as an industrial complex. Industrial enterprises were built, first borehole was drilled (1847), the foreign capital flowed in the city. In the Soviet period Baku became a capital of the Azerbaijani SSR, and after the disintegration of the Soviet Union it became a capital of independent Azerbaijan. At present, Baku is one of the most contemporary cities in the Caucasus with population of nearly 2 mln people.